Beyond 4K: How 8K cameras could revolutionize live event production

It hasn’t been all that long since 4K hit the market and already AV companies are carting out 8K computer monitors and television panels. Four times more pixels. What’s not to like? The current price point, for one, and the fact that there’s precious little 8K content to showcase the benefits of all those extra pixels. Even if there was plenty, it’s still unclear if the human eye can perceive the difference between 4K and 8K during normal viewing.

It’ll be some time before the average consumer (or business) is ready to board the 8K hype train. But we at Epiphan Video are already excited, and not just because video is kind of our thing. We’re excited because we can see practical applications for 8K on the horizon when it comes to live event production.

To be clear, we’re not talking about live streaming in native 8K. Short of a breakthrough in video compression technology, that’s still a ways off for the average consumer. Bandwidth requirements alone put 8K live streaming squarely in unfeasible territory for most, and that’ll likely remain the case for some time. Local 8K video processing is what we see as the most viable short-term live event production use case.

8K cameras are already on the market

Big names like Canon, Red Digital Cinema, and Sony have released 8K-ready cameras for professionals who live on the cutting-edge of video production. These cameras carry hefty price tags, but using one can enable video producers to cut costs elsewhere and simplify their setups while capturing a stunning image. How? By cropping pixel-rich 8K footage in post-production or in real time to get an eye-popping, 720p, 1080p, or 4K image. 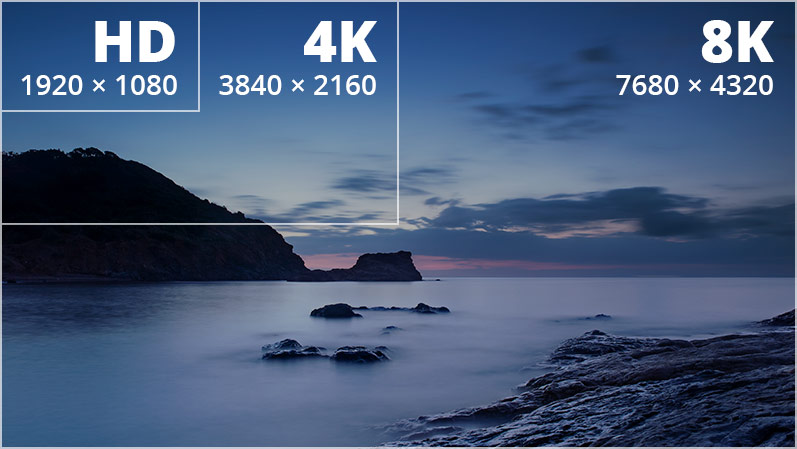 The power of 8K cropping for live video

The same kind of technique has long been possible with 4K. Videographers can crop a 4K frame to get a great composition or make a single-camera shoot seem like a multi-camera production. 8K makes this approach even more powerful by quadrupling the number of pixels to play with – from 3,840 × 2,160 to 7,680 × 4,320. Essentially, each crop would be a small piece (e.g., 1920 × 1080 or 1280 × 720) of a much larger 8K frame. You’ll be left with a shot of excellent quality thanks to the exceptionally high resolution of the native source.

Let’s imagine a practical scenario. You’re producing a live event: a panel discussion taking place in an auditorium. There are four participants on stage. You’re capturing the stage with a single 8K camera set up at the back of the room. With an 8K-capable appliance, you could crop the video into 1920 × 1080 blocks, each framing one panellist. Think of each crop as its own layout. Switch between these layouts and it’ll appear as though you’re shooting with multiple cameras. Combine this trick with auto-tracking technology set to switch layouts based on who’s speaking  and the effect is even more impressive. 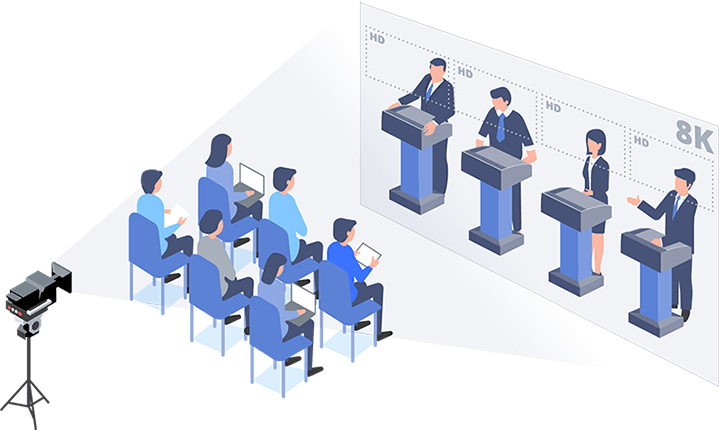 What about bandwidth? All the 8K processing would happen locally, as it would if you were to use the same technique with a 4K camera. It’s a 4K, 1080p, or 720p signal you’re sending to the streaming platform, not an 8K one.

Inching toward an 8K world

The scenario we’ve imagined here might not be feasible today, but it’s where we see live event production going as 8K inches its way to the mainstream. With talk of more efficient video codecs that will make 8K workflows more palpable and companies like Sharp developing more affordable 8K cameras, it’s only a matter of time.

What are your thoughts on 8K live video? Let us know in the comments or message us on social media @EpiphanVideo.

With over a decade of diverse professional writing experience, Michael has deep insight into the technology needs of public and private companies across a broad range of sectors. He’s covered numerous technologies as a copywriter and marketing content creator – from AV hardware and cloud technology to cryptocurrency and blockchain.